The adventures of Jack Jack

The adventures of a first time Mummy and my son Jack.

My son Jack loves to make a mess, what like boy doesn’t?  So when Mummy got the paints out he was in his element. I made my own home made edible paints using the recipe from the imagination tree in case Jack decided on a little taste test.

He enjoyed squishing the paint between his fingers and then making a splat on the paper with his hand. Even though I had made my own paint Jack didn’t once try to eat it so I was very happy about that. 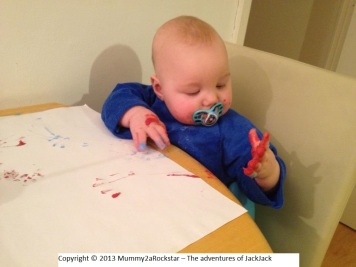 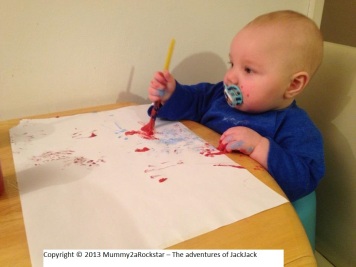 We tried experimenting with different brushes and even some of Jacks cars to make different patterns in the paint.

By the end he was a very messy little boy and then it was time for operation clear up :).

He was delighted with the mess he had made and continued to paint himself while I ran his bath.

Jack enjoyed painting so much that I wanted to try other messy play but hopefully with less mess so I  laid out a pad of paper and some crayons to see what he would do. At first Jack just tried to eat the crayons but he soon got the hang of it and has had a few attempt at creating some masterpieces. 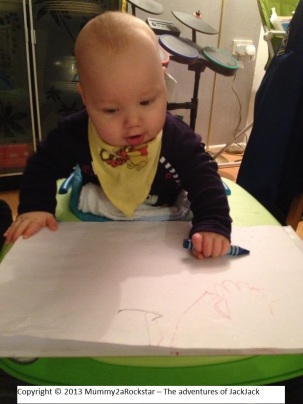 Watch this space for my little artist in the making 🙂

Sereadipity
A Book. A Thought.

A Room Without Books is Like a Body Without a Soul

A Cat, A Book, and A Cup of Tea
Five Little Doves

Find Life in the Budget

A treasure trove of beautiful children’s literature for you to discover.

Thou Shalt Not Covet...

My Real Fairy - Lifestyle blog..... Tales of our family...Book & product reviews, competitions and giveaways, poems, arts & crafts and hints & tips. A bit of everything!

for women who wobble but refuse to fall down

Just Eilidh
We Made This Life

An aspirational parenting and lifestyle blog